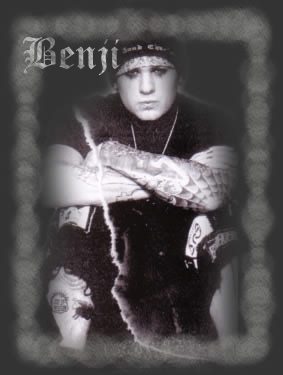 Well, Benji is Joel's identical twin, the "punk twin"; he has tattoos, well, everywhere, including the "sleeves" and all. When it comes to looks, he's the most outrageous member of the band, with several face piercings including at least three lip rings. Benji probably wears more makeup than the rest of the band put together (well, maybe not, but he wears a lot), and he's the one most likely to be seen in a hat - a beanie, or a sideways baseball cap. If not, you might see him in a pink mohawk or "Statue of Liberty spikes", although his current hairstyle is somewhat conservative - basic emo. Lately, he's been wearing a bandana tied over his face during photo shoots - apparently, this is because he's "shy". XD Same family stuff applies as for Joel, and as I said in Joel's bio, the twins co-hosted "All Things Rock" on MTV. It's great hearing acoustics where it's just Benji backing up Joel - since their voices sound the same, the vocals blend perfectly :P.