Good Charlotte are a five-piece punk rock band from Maryland, USA. Fronted by Joel Madden (one of the most good-looking guys in rock, and hence one of the most obsession-worthy) on vocals and identical twin Benji Madden on lead guitar, the band formed when the twins were in high school and has had very few member changes since then.

Joel: "The guys in Chevelle say they're having second thoughts about their name, which was taken from the classic Chevy muscle car, the Chevy Chevelle, which I really love."
Benji: "I like the Chevelle."
Joel: "Now why would you question a name like Chevelle?"
Benji: "I don't know. Why?"
Joel: "A cool name like Chevelle, when it could be worse. You could have a band named after a children's book about a little girl. A book you never even read. A book like Good Charlotte. And then you have to answer all these questions about why, what's the significance of your name, when you really don't know, you were just fifteen and you named the band. And now you're bigger."
Benji: "And you got a mohawk and tattoos and you're named after a little girl. It could be worse guys, Chevelle's an okay name."
Joel: "Don't cry about it. It's all good."

Good Charlotte was named after a book called, you guessed it, "Good Charlotte", written by Carol Beach York and first published in 1969. 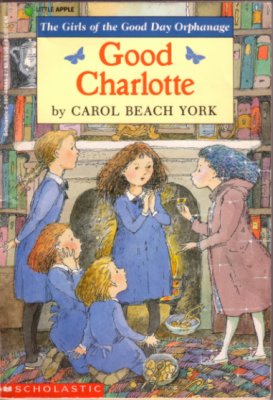 Oh, and apologies for the poor scan quality, I suppose. I got this book six or seven years before I'd even heard of the band, so it's a bit battered.