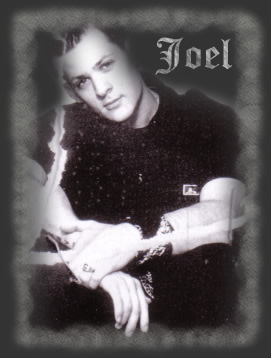 Joel is Good Charlotte's frontman and identical twin to lead guitarist Benji. Recently Benji's been teaching him to play the guitar, and he plays on a couple of tracks from Chronicles. What else can you say about Joel? Anything I say you probably know already. OK, he's the cutest member of the band. He also admits that he's the member who hits on girls the most. In high school, he got kicked out of class for talking to girls too much. He and Benji co-hosted MTV's "All Things Rock" rock video program.

Hmm... besides Benji, he has an older brother, Josh, and a younger sister, Sarah. When the twins were in their teens, their father walked out on them on Christmas Eve, leaving their mother Robin to look after the four kids by herself. Umm... he wears a promise ring that his mother gave him when he promised not to have sex until he gets married; he's a committed Christian. Uh, Benji calls him the ghetto twin, and he calls Benj the punk twin.